rights: This Item is protected by copyright and/or related rights. You are free to use this Item in any way that is permitted by the copyright and related rights legislation that applies to your use. In addition, no permission is required from the rights-holder(s) for educational uses. For other uses, you need to obtain permission from the rights-holder(s). http://rightsstatements.org/vocab/InC-EDU/1.0/ 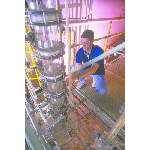 Photograph of a Tennessee Tech University chemical engineering student squatting on scaffolding to work with a machine. The photograph was taken for an article in the Cookeville Herald-Citizen newspaper. Photograph of two people working at a computer in a Tennessee Tech University engineering lab. A model of a machine is displayed on the computer screen. The photograph was taken for an article in the Herald-Citizen newspaper. Photograph of a Tennessee Tech University football player running with the football during a game against Western Kentucky University. The Tech player is wearing a #1 jersey. Photographs of students in classes at the Tennessee Tech University Appalachian Center for Craft.